I read this for my 50 Classics project and also for the Genre Classic in the “Back to the Classics” challenge. 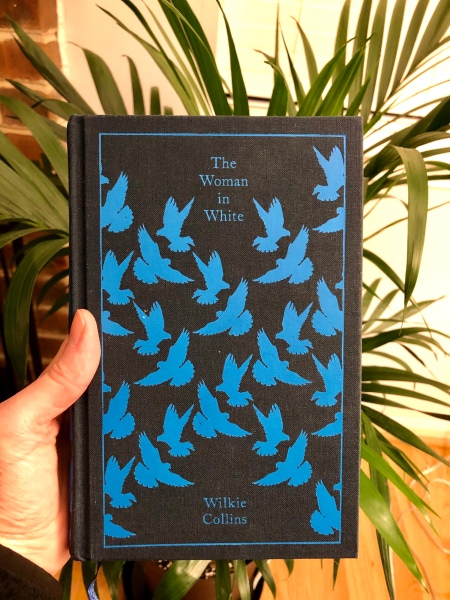 It’s supposed to be one of the first “mystery” novels. It’s kind of like Charles Dickens writing a mystery–there’s a lot of ramp up as it slowly builds the picture of what’s going on.

Overall, I enjoyed it, but it was definitely slow moving, especially at first. The novel is written from several first-person perspectives, but the primary protagonist is Walter Hartright, an artist and drawing master who becomes connected with the Fairlie family when he’s employed to teach drawing to two half-sisters, Laura Fairlie and Marian Halcombe.

Marian is described as dark haired and eyed and “man-like” in her firm mind and stout heart (also, Collins tells us, she doesn’t wear corsets). Laura, meanwhile, has light hair and eyes and is much more emotionally and physically frail. One assumes she does wear corsets. Obviously, this being a 19th century work, Walter falls for Laura…cue eyeroll. But alas! Laura is engaged to Sir Percival Glyde (what a name!) and Walter quits his job and goes abroad to forget her.

Most of the book centers around Sir Percival’s nefarious plot to get Laura’s money, which he’s limited in drawing from because of a well-written Trust (competent estate planning for the win!). Laura soon discovers her husband and his Italian friend, Count Fosco, are after her money, and the reader begins to fear for her safety.

I don’t want to spoil everything, but there are two lookalike women, the fortune-hunting unscrupulous spouse, a shady foreigner, a mysterious death, and a cranky invalid uncle who is too ill to deal with your bullying ways…fetch my smelling salts!

Things did pick up at the end, and while a good editor might have improved the pacing, it wasn’t bad for an early mystery. Just don’t expect a Holmes-style sleuth–the genre had not yet advanced to that stage, and if you have time and want to settle in, this is an enjoyable read.

One thought on “The Woman in White”