Well, I’ve done it. I finally (five and a half months later) finished Tolstoy’s epic tale.

I’ve discovered that while I enjoy Russian literature, I can really only read in small-ish chunks at a time because I find it all a bit exhausting. Everything is so epic! So overblown! So many feeeeelings! 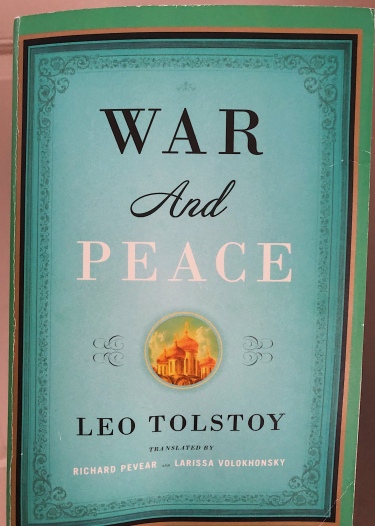 This is a big story taking place during the Napoleonic wars. It bounces between “war” sections in the fighting and “peace” sections in society.

Tolstoy’s war sections focus on soldiers, their feelings at the moment, the larger movements of campaigns, and Tolstoy’s own theories of war and how history (mis)represents them, and a few main characters in particular.

The “peace” sections focus primarily on three families: the Bezukhovs, the Bolkonskys, and the Rostovs, though members of these families all fight in the war as well.

What can I say about this book that has not already been said, and more eloquently? I did really enjoy falling into the story, and the characters were well-drawn and engrossing. It moved more quickly than I anticipated, opening at a party without preamble.

Some war sections were a bit of a slog for me, but overall it’s pretty well paced. It’s just a LOT of book.

Three tips if you decide (which you definitely should!) to read this book:

1. Have a list of characters and their nicknames handy. The version I read had a list at the front, which I copied and had next to me when I read. Everyone has their given name, at least a couple of nicknames, and there are MULTIPLE CHARACTERS NAMED NIKOLAI! So it’s good to have a reference.

2. Settle in. I recommend you start reading in the winter–it just feels more appropriate to the setting (you too can pretend you’re the French army freezing to death as you try to retreat out of Russia in 1812!). Just let yourself sink into this story, into the characters, and hang in there for some intra-story essays on war and how history treats war.

Tolstoy has mostly story and history here, but he definitely blends some essays into this work.

3. Prepare yourself for some French, which in my version, Pevear & Volokhonsky (the translators) translated in the footnotes. The aristocrats speak a lot of French in society, though as the war progresses the amount of French decreases. On the one hand, it’s a little annoying to have to read the footnotes to understand everything, but on the other, it makes it clear when someone is speaking French and when they’re speaking Russian. I don’t know how they would have achieved this if they’d just translated everything into English.

I hope you read this book, and when you do (or if you already have), please come find me and talk about it! It’s a daunting book to pick up because of its length and reputation, but I found it much more readable than I feared. I haven’t read any other versions, obviously, but I recommend this translation by Pevear & Volokhonsky–there was nothing choppy about the style of writing, it all flowed smoothly, which I appreciated. I’ve read other translated works where I’m sure I missed some of the beauty of the language because while the sense was translated, the prose felt stilted. None of that was present here, making it easy to immerse myself in the world of Natasha’s singing, Pierre’s muddled philosophizing, Andrei’s moodiness, Nikolai’s excitement being with his fellow soldiers….

When people say this book is about everything, they aren’t wrong.