Thanks for hanging with me thus far, everyone!

In this round, we have first the Tim Ferriss Show. This is an interview show where Tim asks questions of people who are experts in their field or who have accomplished something that interests him.

This podcast (episode 230) was an interview with Debbie Millman. Apparently this was the second interview, and the format was a little different — Tim gave an intro and then she recorded answers to listener questions (and a few Tim Ferriss questions), so it was mostly just her talking. She’s an artist, designer, and teacher, and had interesting things to say about coming “late” to her career path. I enjoyed listening to her talk about that a bit, and especially enjoyed her answer to Tim’s question about what she does immediately after waking up.

Next up, Crimetown. Episode 2 continues to dig into the life of the former mayor of Providence, RI, this time examining the context into which he started his political career. The episode focused on the recruitment (in a maximum security prison) of two of the crime family’s enforcers. The whole thing seems like a movie — the head of the crime family, Raymond Patriarca, basically had a nice apartment in prison with his own tv, telephone, glass glasses and fine scotch…. Apparently the prison was a great recruitment center, and when your reach is long enough, the prison guards let you do what you want.

In Criminal this week, another story that shows fact is stranger than fiction. This story (episode 66: Bully) is about a man who single-handedly bullied an entire small town into letting him do what he wanted and avoid consequences for about 20 years.

The story shows how isolating fear can be, and how it can break down the justice system if someone is able to intimidate everyone into submission. It’s hard to believe something like that could go on for so long — police, judges, and juries lived in fear of retribution , and it took a long time for anyone to do anything about the town menace.

Next, I listened to the TED Radio Hour episode on the 7 Deadly Sins. Right off the bat, the first presenter says lust isn’t a sin and can be good. Maybe he’s unfamiliar with how much trouble lust has caused throughout history? He claims our ancestors were probably polygamous, and they were more ok with open relationships, but I think there’s a reason lust is on the list of deadly sins.

I agree with the presenter that equating sex with a deadly sin is a problem, but lust unchecked can pull relationships and families apart.

The other 6 talks were ok — just very short treatments on each topic and how they can be destructive, or else interesting stories of people trying to overcome various of the sins.

In case you’re interested, here’s a look at the standings: 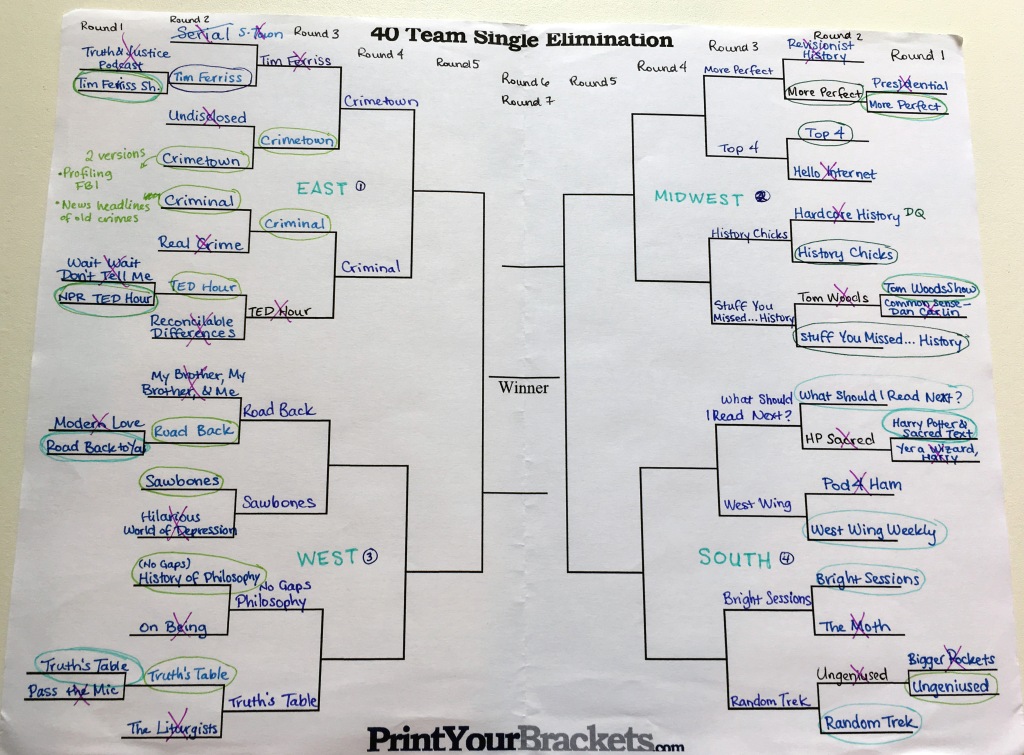 Next time, the Midwest, Round 3!