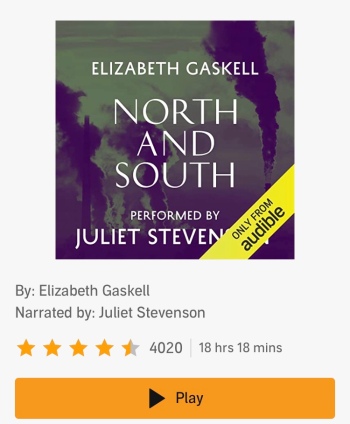 19th century British writing is one of my sweet spots, so obviously I enjoyed North and South.

I think I discovered Gaskell from the Modern Mrs. Darcy blog as “what to read when you’ve read all of Jane Austen.” While I think this is accurate, I also think Gaskell was interesting in using her novel to explore the plight of the workers in manufacturing towns who could barely feed their families. Though this story was not completely about this, it was certainly a prominent theme and discussed at length by various characters.

Margaret Hale, the protagonist, goes back to live with her parents in a Southern English parish after living in London with her aunt and cousin. Margaret’s father soon leaves the church as a dissenter, and moves his family to the Northern town of Milton.

There Margaret sees the contrast between her previous rural, out-of-doors life and her new life in a smoky, bustling, industrious town. She befriends a working-class family and clashes with her father’s pupil the manufacturer Mr. Thornton. Obviously repressed British emotion ensues!

There’s a lot of talk of putting on a brave face and bearing up under difficulty, and Margaret does experience tragedy. It cam be a bit melodramatic at times, but this is still a lovely story that I enjoyed.

I’ve heard North & South compared to Pride & Prejudice as “Lizzy and Darcy but in a manufacturing town!” and it is an opposites-attract story. While Pride & Prejudice is lighter with more witty/ ridiculous characters, North & South has more earnest discussion of strikes and working conditions and the struggle and occupation of life, but in both stories the main characters come to realize their first impressions might have been hastily formed and someone who they first dismissed might actually be someone who could help them grow and become happy.