Gods of Jade and Shadow, by Silvia Moreno-Garcia (2019)

Our heroine, Casiopea Tun, starts the book as a Cinderella-type figure: the lowliest relative who does menial tasks for her grandfather, aunts, and spoiled cousin, Martín.

One day she opens a chest in her grandfather’s room and frees the imprisoned god of death. This leads to an adventure fetch quest to help the god regain his power and throne.

I don’t know much about Mayan mythology, so it was fascinating to get a glimpse of another culture’s mythology and the twin gods of death, Hun-Kamé and Vicub-Kamé, and their vast realm Xibalba.

This was a fun summer read with a plucky heroine who longs for adventure, magic, mythology, a 1920’s setting, and a dash of romance thrown in for good measure. There are also several twins or matched pairs, and the tension ratchets up to the final challenge, the final choice Casiopea makes. I appreciated that at the end it is her choices that matter and drive the outcome, reminding us that we lay the foundation for the next choice on the back of our previous choices.

The Night Circus, by Erin Morgenstern (2011) 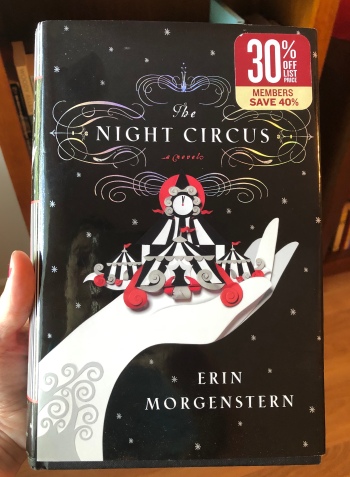 Two magicians (yes, I stumbled into another book about magicians!) have competing methods of doing magic, so they have a competition: each chooses a student and then the students compete against each other in elaborate competitions. The current competition takes place in the titular circus.

Celia and Marco are trained from childhood to be magicians, but they only know that there will be a competition, not what the rules are, and in fact, they don’t even know who they’re up against until they discover it in the middle of the competition. While they are supposed to be fierce rivals, they each find themselves attracted to the other… which is not what their mentors had in mind at all.

This seems to be a book people either rave about or it wasn’t for them. I think I fall in the middle of these two perspectives. There were parts of it I really enjoyed and thought were effective, and parts I thought were a little disappointing.

The descriptions of the circus and the tents were beautiful and magical. I didn’t love that the chapters moved back and forth in time, though I understand it was to introduce characters who would be important later but who would feel shoehorned in if the story was strictly linear.

Part of the problem was probably that I’d recently finished Jonathan Strange and Mr. Norrell, and that was so amazing that it overshadowed The Night Circus.

I’m only giving myself half credit for this one because I read part of it and then skimmed the rest. It wasn’t that it wasn’t interesting, just that I get bogged down so often in non-fiction books when there are lots of examples. I get the point and want fewer examples.

This is written by a Gen-X woman who sets forth the difficulties facing women today, especially as Gen-X women slide into middle age. Technically I’m a Millennial (cue avocado toast jokes), but I imagine many women of my generation will face similar challenges.

Calhoun sets the stage here: Gen X women grew up hearing they could have it all, could do anything they wanted, and were encouraged to pursue career and family, but with little support on how to sustain both full-time. What happens when a generation pushed to aim high reaches middle age and finds they are squeezed tight on all fronts? What happens when they feel they’ve “done it wrong” or their relationships are falling apart or they don’t have much saved for retirement? The sheen of youth has worn off, and women over age 40 are encouraged to be invisible (but still productive).

Basically, Calhoun says we’re expecting too much of ourselves. She suggests lowering expectations a bit and being more present in the moment. She also notes that like other phases of life, the middle age malaise might be a phase–the feelings might not last forever.