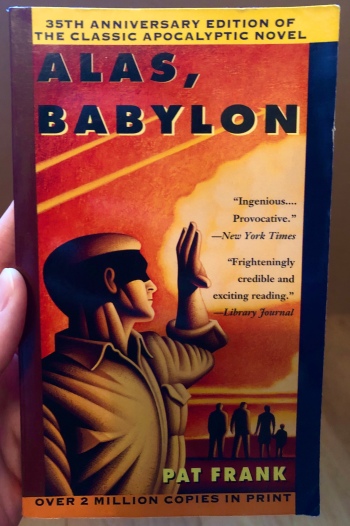 I first read this book in high school, and remembered enjoying it, though the details were fuzzy.

It was published in 1959 during the Cold War, and is set in a small central Florida town. Life is proceeding as usual when a young American pilot follows a Russian aircraft out of American airspace and shoots it down. Russia responds by firing nuclear weapons at American cities and presumably America responds in kind. Our characters don’t know what happened for a long time as nearby cities are obliterated, electricity and infrastructure knocked out, and travel impossible.

This becomes a tale of survival for the Bragg, Henry, and McGovern families and their neighbors. They have to figure out how to feed themselves, get water, cope without news of the wider wold, and fend off looting highwaymen.

It was interesting to read about this kind of disaster while living through another different kind, and I’m so glad not to be foraging for food right now or trying to make trades with my neighbors so we can all survive.

While I enjoyed this book, it’s definitely a product of its time; the Henrys are a black family, and as such, are looked down on by most of the white society (until everything falls apart and they’re actually the most prepared). It’s an uncomfortable reminder that “all men are created equal” in our founding documents is something we still need to strive toward. Frank’s main character, Randy, also thinks at one point, “The more [I] learned about women the more there was to learn except that [I] had learned this: they needed a man around.” I rolled my eyes pretty hard at that one.

Also, we really don’t want a nuclear holocaust. This book shows how hard it would be to survive even if you were in a pocket spared by radiation. Living only a couple hours south of Washington DC, I’m pretty sure I wouldn’t make it in such a scenario. So let’s all keep our fingers off those launch buttons please and thank you.

One thought on “Alas, Babylon review”