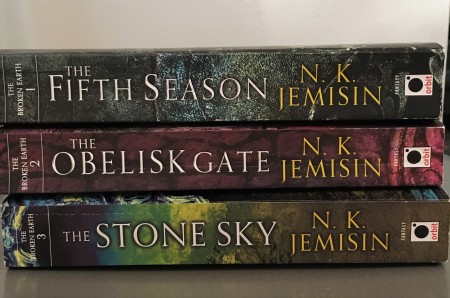 The first book starts with a cataclysmic event from the perspective of an unusually gifted woman who then starts on a quest to find her missing daughter. The book shifts between three female perspectives and doesn’t really stop to let you catch up–there isn’t time. I was intrigued but also confused for the first 50 pages or so. I discovered later that there is a glossary of terms in the back of the book, which might help the first-time reader (I’m impatient though, and hate flipping to the back, so I took the approach that eventually I’d figure out what all these new words meant. I did, so it worked out).

The second and third books expand this fractured, pain-filled world further, and Jemisin’s imagination is on display here. Her characters are messy, interesting, and just trying to survive. In a brutal dying world, all choices are hard.

The books explore the relationships between oppressed and oppressor, and what happens when the rules shift during times of disaster.

These books all won awards (the first two won the Hugo and the third won the Nebula), and I think well-deservedly. They are well-written, fast-moving, heartbreaking, and I deliberately read them slowly so I could remember them better (I hope) than if I just inhaled them.

A friend lent me these books after I read Dune earlier this year, and there are certainly parallels: inhospitable environments, power struggles, and quests. Where Dune is more science fiction though, I’d call The Fifth Season fantasy (some people have magical abilities, and we don’t need an explanation of why). But they share some similar tones. The Fifth Season also has a female protagonist, while Dune is heavily male-centric.

Dune has more political machinations, and in the Fifth Season trilogy, I think the characters are more nuanced. Both are great feats of imagination, which is what I love about science fiction and fantasy stories. While we can escape into theses stories for a while, their ideas linger into the real world and make us question the way we approach our real problems.

EDIT/ UPDATE: It was just announced that The Stone Sky has won the 2018 Hugo award, so now all three books in the Broken Earth trilogy have won this award! Awesome.

2 thoughts on “The Broken Earth Trilogy”